​JARVISH and Tieto to team up to make Motorcycling Safer

eCall: Time saved = lives saved, JARVISH and partners work together to save lives with an eCall enabled helmet

JARVISH – will integrate the eCall functionality into their next generation Smart Helmets.

Multiple party marketing of the new product throughout Europe. Idneo in Southern Europe; Tieto in Scandinavia; and JARVISH in Asia

Barcelona, 18 August 2017. eCall: Time saved = lives saved. eCall is an EU initiative with the purpose to bring rapid assistance to motorists involved in a collision anywhere in the European Union. One of the founding principles of JARVISH is to make the Motorcycle experience safer and JARVISH already has developed a crash detection function using the build-in sensors and camera inside their smart helmet.

As of April 2018 all new cars in Europe will be required to have eCall functionality. JARVISH and Tieto believe that this initiative should be expanded to Motorcycles and Mopeds. The JARVISH helmet makes this an easy and cost effective solution that the EU should adopt,

In this project JARVISH will take the lead in defining the specifications of eCall-enable smart helmet system. As a market pioneer JARVISH already integrated a full range of sensors in their helmets the eCall functionality is planned for their next generation Smart Helmets. The first demonstration of the eCall smart system will be the beginning of October.

As part of the collaboration JARVISH will work with Tieto in developing the eCall system in smart helmets as part of their “Connected Biker ecosystem” in Nordic countries. Idneo/FICOSA will build on their success in eCall for 4 wheel vehicles and provide engineering support as well as focused marketing and sale in southern European countries.

According to a recent Forbes Article “Motorcycles serve as the main mode of transportation for over 400 million people in Asia. A significant number when you consider there are only 50 million riders in the rest of the world. Motorcycles are still the most dangerous mode of road travel despite many governments mandating the use of helmets. The risk of death for motorcyclists is 20 times higher than car occupants.”

This feature coupled with the existing sensors in the JARVISH smart helmet will not only make riders safer but also revolutionize the insurance industry for motorcyclists. By measuring the rider’s behaviors by monitoring how fast they ride, how they turn and brake. Insurance companies can better profile riders and offer insurance based on behavior versus demographics. It is believed that these tailored policies will be more cost effective for many riders and allow insurance companies to be more profitable.

According to Forbes “In China alone, consulting firm Oliver Wyman estimates innovative insurance products and connected ecosystems will present insurers with the opportunity to grow premium revenues tenfold, amounting to $60 billion by 2020. The country’s first digital insurance company Zhong An says they are not only exploring user based insurance products, but applying big data to achieve more accurate service to customers. In an effort to combine new technologies with motor insurance, the Tencent and Alibaba-backed insurer plans to launch a big data lab during the third quarter this year.” The JARVISH smart helmet could be an important new tool for these insurance products.

The full Forbes article can be found here: https://www.forbes.com/sites/pamelaambler/2017/08/01/smart-helmets-are-the-new-frontier-of-insurtech-gadget-saving-your-wallet/#3b57507d5f9c 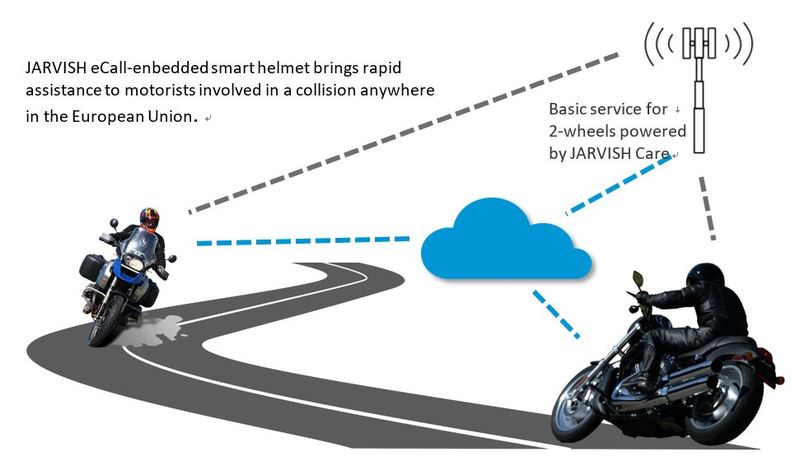 JARVISH is a pioneer company in designing and manufacturing smart helmets.

“We have been closely monitoring the EU eCall initiative and think the Jarvish solution is a perfect fit. We also see the benefit of this system for insurance companies and we look forward to working with both Jarvish and it partners and the insurance industry to radically improve the way insurance premiums are calculated for Motorcyclists”

JARVISH CEO Jeremy Lu highlights: “One of the founding principle of JARVISH was to make the riding experience safer – I was committed to this because of personal experience when my brother was involved in a very serious crash. I see the eCall enabled Smart Helmet as significant step forward in safety and something that would have made a big difference in my brother’s accident”

JARVISH has recently opened a round of funding to attract investment for this project.

Tieto Oyj is an IT software and service company providing IT and product engineering services. Active in more than 20 countries with approximately 13,000 employees, Tieto is one of the largest IT service providers in Europe. Tieto is domiciled in Helsinki, Finland, and the company's shares are listed on the NASDAQ OMX Helsinki and Stockholm.

Founded in Taipei in 2014, JARVISH designs and manufactures smart helmets that use augmented reality for both, industry and consumers. Their products, currently on the market, integrate accessories into a smart helmet. The integrated sensor and processor connect to the cloud to make the helmet a new platform for a safer, more pleasant experience on two wheels. JARVISH is already shipping helmets and has recently won the Taiwan regional championship of the Startup World Cup.